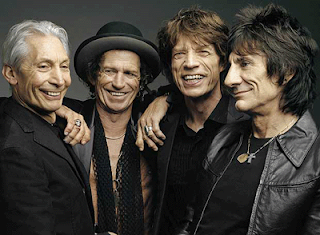 
The Rolling Stones???
They also do Sympathy for the Devil and Street Fighting Man thereby still qualifying them as the “bad boys of rock and roll”! Their musical range is so incredible but as importantly, the human character remains.

My grandson saw, close up, the roadmap that is Keith Richards. Headband, sweating onto beads, dripping into those deep intense grayish eyes; his impish grin mouthing the song while cigarette sticks to his lower lip. He said to me, "this guy is scary". To which I replied, "that is his beauty.

The film is not a history of the Stones and Martin Scorsese lets their music tell their own story in concert filmed over two days at the Beacon theatre in NYC. The cinematography is great, the sound quality even better. The on-stage performance opens with Jumpin Jack Flash and immediately the camera opportunities in this small venue don’t fail to display the power of the band; epitomized by Mick Jaggers energy for his art form. In a television snippet, Dick Cavet asks Mick “Do you see yourself doing this when you’re sixty”. The answer comes in the form of a camera opening on the sixty three year old (in 2006) doing Start Me Up.

Yes – the bad boys are older – Ron Woods semi-spiked hair looking a little hoary and Charlie Watts looking the oldest because ALL his hair is gray. Their art visually appears less elegant than the seventy year old Buddy Guy joining in on Champagne and Reefer (seems blues and jazz artists come into their own with age but rockers aren’t allowed). Yes, yes others like Tom Petty and Santana are “old”. BUT the Stones are more interested in blowing up the house than they are in being mellow. They do a softer sound in as tears go by which was given away in 1964 to Marianne Faithful (who was a lover to all the Stones except Charlie), however that song leads to She Was Hot.

I’ve always known them as “The Worlds Greatest Rock and Roll Band” but I went in a little skeptical. Perhaps it’s a bias recently fed by attending the very different SXSW music festival where indies introduce new sounds and are expected to show their best without the direction of Martin Scorsese. Other, more objective, arms length reviewers gave the movie four stars. Just a couple of things bugged me: one was Bill and Hillary Clinton showing up on-stage to greet the contributors to his charity and the other was Christina Aguilera sharing vocals on Live with Me. (On second thought, it’s just like Mick to get next to a long-legged blonde)! I rather like the image of Stones hanging around with Hells’ Angels and jamming with John Lennon and Eric Clapton.

In the end, of course, it’s their timeless music. This great concert does include Satisfaction and Some Girls and Tumbling Dice and Just My Imagination done their way.
Others I wish they had included were Paint it Black and Wild Horses and Gimme Shelter and Angie and You Can’t Always Get What You Want