The Mark of a Man 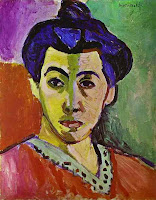 It is fact that at the turn of the 20th century, for a brief time, there was a post impressionist painting style called “fauvism,” named after the French for “wild,” because it involved using bright colors with bold strokes. Henri Matisse (pronounced “on- ree’ mat’-ease” by the anal retentive eastern seaboard set) was credited for innovating this style when he painted a green stripe on the nose of his wife in a portrait of her.
It is conjecture that he planned a nice intimate dinner party with a roast in celebration of the event; but Madame Matisse; as you might see, was not a woman to be trifled with; upon seeing this painting, was he 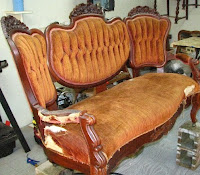 ard to remark; “Let him eat cold Quiche;” giving rise to the expression “humble pie,” as well as casting doubt as to whether Henri was a real man.

It is fact that the couch recovered from his studio was well worn.
Posted by Jerry at 5:43 AM