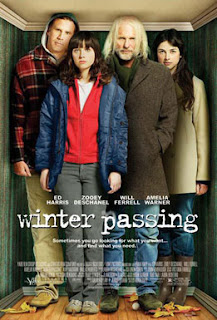 Last night’s cinematic diversion was “Winter Passing,” a little jewel of a story full of rich character development and human pathos. While sad and somewhat bleak, it isn’t a tear jerker; but rather a poignant tug of the heart. It is quirky and slow in unraveling ; but the story is worth the effort if you (as Ebert says) “listen” rather than “hear”.
The synopsis from “Rotten Tomatoes”:
Adam Rapp makes his impressive feature film directorial debut with WINTER PASSING, an intimate, often bleak, but ultimately hopeful film about the importance of family, however dysfunctional. Zooey Deschanel carries the movie as Reese Holdin, a sullen, depressed, self-mutilating actress struggling to stay afloat in New York. When an aggressive editor (Amy Madigan) offers her a fat check in exchange for the love letters written by her famous writer parents, she returns to her father’s Michigan farm in search of a payday, but instead finds herself trying to connect with her estranged father (Ed Harris), as well as the odd surrogate family he’s assembled for himself. Rapp’s script is sharp and his direction is solid, but his greatest achievement may be the performances he coaxes from his talented cast. Ed Harris is powerful and moving as Don Holdin (whose last name makes the Salinger reference explicit), an erstwhile American icon who’s become alcoholic, reclusive, and borderline insane since the recent suicide of his wife. Will Ferrell shows off unexpected range with an effective, understated comic turn as Corbit, an odd former Christian rocker turned bodyguard and handyman, and Amelia Warner is engaging as Shelly, a pretty young former student who watches over Don and might or might not be his lover. But it’s Deschanel who propels the movie, making her character at times profoundly unlikable--as in a jarring early scene in which she drowns her terminally ill kitten in the East River--but nevertheless riveting and redeemable. While there’s never much doubt that Reese will manage to rediscover herself with the help of her father and his companions, the characters are unique and well-drawn, and watching her do so is a pleasure.
Not an epic, but a wonderfully developed effort displaying the human condition; it’s worth a viewing investment.
Posted by Jerry at 6:10 AM