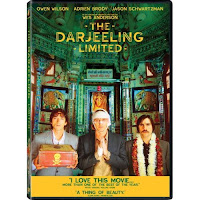 One of life’s greatest rewards is the continuum of receiving “gifts.” Rather than the childhood formal presentations of “I want” birthdays or holidays, they mature into delightful little treasures of discovery, coming from who- knows- where to surprise us once again at how little we know of the waters in which we swim. Things like “Wired Magazine” or “Sahale snacks” are the condiments of an extrospective life.
One such surprise I have had to coin a word for. “Trainsport” is my word for the movie The Darjeeling Limited . A surreal word for a railroad romp of a surreal travelogue through India on an adventure of the human spirit.
Where my last cinematic foray, Elizabeth; The Golden Age , was an actor’s movie and a costume designer’s dream, “Limited” is a director’s film. This is not an East Indian “Borat.” Still funny; much more subtle. From the exquisite editing, the scintillating dialogue and the stylistic cinematography, we are gifted with a clever story that needs no attention to plot. Rather, it is better that you just sit back and allow yourself the pleasure of travelling along as the story unfolds. The seduction scene, where one of the brothers and a Indian female train attendant play to one another as heads stuck out the windows of the speeding train for a furtive “smoke,” is but one example of the directorial delights. And, I can recollect no other movie where luggage gets a co-star billing; but, boy, is it grand luggage. And, indicative of a piece I wrote elsewhere on conspicuous consumption; for conspicuous consumption is a big part of this adventure. At first I was put off by the branded placement of an “I-Pod,” as a prop, but then realized it was a segue for the music that is so much a part of the film. Everything is there for a reason, if even for a neurotic one.
The movie is actually two. There is a short film that precedes the main feature. While set in modern day, the art nouveau style is reminiscent of a big 1920’s studio production, lavish in the detail. Listen to the words of the song that backgrounds this first introductory piece. It is setting you up for all the forthcoming conspicuous consumption.
You will laugh. You will be bewildered. You will be confused. You will be moved. Let yourself be. This is as much meant to be an adventure for you as for the characters in the film. Even the cameo by Angelica Huston, a personal fave, is just another squeeze of juice in this sweet lime of a movie. It is among the best I have screened this year.
Posted by Jerry at 3:39 AM