The funeral was a quilt intimately crafted by those who cared. Through their tears, they had sewn squares of bitter-sweet memory into the whole cloth of the mass, the hymns, and the poetry. Wrapped in the tender tapestry, Stan lay secure.

Stained glass, candles and white vestments lit the church. Scripture gave comfort, the homily consolation, the eulogy honor to Stan and to the families who loved him. The last hymn ended quietly. The priest sprinkled Stan's shrouded casket with holy water and the pallbearers bore him down the aisle toward the church's stately doors. The mourners followed tentatively. 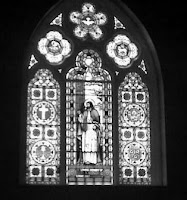 As all were about to leave in silence, the hushed piano of the final hymn began again, its plaintive song muffled by the voids of the high church. The music was tasteful, respectful, quick and full of life. You had to listen carefully to tell that it was a polka.

The music that was Stan filled the sanctuary. Here was the young man who played his accordion with Paul and Mishka in a polka band. Here was the troubled soul who bumbled and complained but who always had something good to say about his wife and his family to his friends. Here was Stan, who used his music to relate, to give life meaning, to get by, to survive the pain of hard work, divorce and alcoholism, to outlast family dissolution, to celebrate reconciliation with his children, to revel in his new marriage. The piano recapped the verse and bounced into another chorus. "It's just another polka..." step - together, "Just another polka..." Hope, escape, struggle, triumph, the sounds Stan had finally learned to make without apology, without playing a note or singing a word flowed from who he was.

"the music that was Stan"
lotta soul there bro

This is beautifully written. You capture the scene - and atmosphere - brilliantly. Thanks for sharing it.

I don't even know Stan, yet you created him here for me and I found myself mourning his loss with a lump in my throat. Oh the joy and heartache associated with living any life. Thanks for bringing it all home.

Lou, I could feel the connection of ceremony, music and person in your piece, a connection we just tried to make in mom's funeral. I related intensely to the piece. thanks. Sally R

I'm a friend of Carolyn's; she shared several of your posts with me. (I recall meeting you very briefly at Carolyn's home last summer as you were on your way out the door.) Your talent for bringing me into your moment is at once subtle and powerful. Keep writing...

"The music that was Stan filled the sanctuary." This is wonderful, the flow of music through his life and the clarity of your words and vision make this an incredibly touching and tender piece.
Michele

The parallel between the expected dignity of a funeral and the unexpected, clear voice of the piano polka universally mirrors our lives as much as Stan's.