The Fenway area has some university buildings but Back Bay is where most of Northeastern is and I found myself walking along Boylston Street eyeing the upscale stores and markets. The walk from the Greyhound terminal was quite long – though I felt very much at home in the neighborhoods I passed through. People were already coming out of their houses and sitting on the sidewalks and on the front porch to escape the hot, close air of late August in the city. All the images of back home were here; little girls chalking the sidewalk, three guys smoking Lucky Strikes, grandma sitting with a flyswatter, a push-cart with iced lemonade and a row of seated old-timers re-telling stories. Across the street was a fire hydrant wide open, 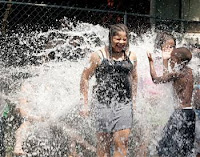 spraying the street and any kids or cars brave enough to do a water crossing. There was a store I had to go into because the sign on the outside proclaimed it to be “The Best Italian Food Store in America”. The first thing I saw through the opened door was a wheel of white cheese rolling across a counter to the cutting area where a small woman, dressed in black, urged the young roller boy to be careful while cutting a wedge for her. The odors were of olives and garlic and baking bread and brewing finely ground Italian coffee while my eyes were feasting on the salamis and prosciutto and red peppers. They made me a sandwich and I ate it while walking through this ‘hood, a soothing familiarity to its streets and sidewalks.
Boylston Street had no carry out sandwich shops although they did have some fancy names on their restaurants like The Radius, Legal Sea Foods and finally an Italian place called Tamasso Trattoria. I kept an eye open at every crossing until I would find Mount Vernon Street; there I would be on the last leg of my journey to Maries Boston home. 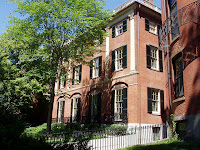 Isn’t that a bitch when nobody’s home!

So now I gotta ask somebody where the school is but I just start walkin west until I hit a street called Massachusetts Avenue. We don’t have an Illinois Avenue back home so it struck me that Boston must be the state capitol to have a street named like that. Left turn, and I find myself in front of the Cranston Theatre that has signs on the sidewalk and the building for a “Music Concert featuring Paul Revere and the Raiders”. I’ve heard of these guys! They got a record out called ‘Louie, Louie’ and the song made it to #1 except it wasn’t theirs that made it. It was another group called The Kingsmen that hit the top of the charts. The big story about this song is that the governor of Indiana banned sales of the record and no playing of it on the radio because of “indecent lyrics” (nobody could understand what they were saying anyhow). The other weird stuff about this song was that it was recorded right about the same time by both bands right in Portland, Oregon. So what the hell was Paul Revere and the Raiders doing in Boston? Go figure. That governor was just another example of the discrimination and suppression surrounding the release of anything rock and roll.
Soon other stations weren’t playing any hard beat (was it that payola thing again) and the charts fell to a Bobby Vinton song called ‘The Flying Nun” or
"The Sky High Nun" or something like that - boy did that make me wanna puke! Here at the Cranston Theatre in Boston and far from Indiana there was a song list topped with ‘Louie, Louie’ followed by the flip side called ‘All Night Long’ and a cover of Elvis’s ‘All Shook Up’.
I wondered what you could get on the radio in this city – did they dare do any Smokey Robinson ‘Shop Around’ which, in the record stores became a million seller, but never made it to #1 on the charts. One of my all time non-favorites made it the top though – Connie Francis (gag) singing ‘Don’t Ever Break the Heart that Loves You’. Nice idea but shit rhythm!
The hardest workin man in show business - James Brown - did his first show at the Apollo a couple of months ago
(co-incidentally it was on the same day they found Marilyn Monroe dead from an overdose) and I think the backlash from his Negro spiritual up-beat tempo was ferocious because all these novelty songs hit the airwaves all at once; the two worst ones were

‘Itsy Bitsy Teenie Weenie Yellow Polka Dot Bikini’ and the other from a guy who was now also on television – Mitch Miller scored a #1 with a song called ‘Calcutta’ and then, along with his bubble machine and on national television, he had a guy with fake sideburns sing ‘Don’t Be Cruel’. Yes, please, don’t be!
“I’m Cryin” to quote Roy Orbison, a rockabilly guy from Elvis’s part of town.
# # # # # # # #

I’m still on Massachusetts Avenue and there are a ton of directional signs to university buildings and I see an arrow to the library so I figure I’ll start there. There’s some commotion up ahead and as I get closer I see about 50 college kids walking in a circle, holding up a few signs saying “Stop the War in South East Asia”. I didn’t know who was fighting there but I could’ve guessed it was us because one sign said “U.S.A. leave Viet Nam Today”.

Marie came to Northeastern because she was always interested in things happening all over the world and this school had a program called “International Studies” and was supposed to be the best. If I could ask one of these guys where that building is I could save some time and I needed to because it was nearing dusk. There’s a fellow whose not walking in that circle so I go to him and ask about the international studies building. He tells me there is no ‘one’ building for that so if I was looking for someone I should try either the student union or the library. Okay, thank you, and then he says, “Are those blue jeans that you’re wearing? We don’t see them much here in the city. Nice”, (Thank you, Brother Bernard)!
I see the sign that says ‘student union’ so I turn to see a two story building with glass walls and big glass doors – almost like a downtown building. Inside you can see the entrance to a cafeteria and a bookstore and a bowling alley and there’s a staircase up to what the sign calls “Study Lounge”. Walking around, I get some nice feelings with the atmosphere; good lookin people all focused on reading and quiet talking, but I don’t see Marie so I look for the road that says “Library”.

My heart beats faster as I just stand to see her again; up there, 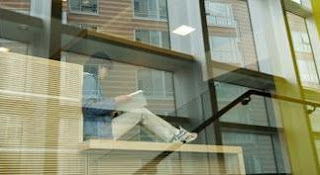 sitting with a book on a windows' ledge! It’s her; it's my Marie, it’s not someone else. I get a little choked and I’ve never had my eyes get moist when I was happy but I am and I gotta wipe my eyes. I swallow hard and how I hoped she would look out to see me; didn’t happen so I went in and climbed the stone stairs to the second floor. When I trotted around a corner, we were fifty feet from each other. I slowed to stroll to her and her eye caught movement.
She closed her book, opened her arms; I shed tears onto her shoulder.

Baby, to know you is to love you
You smile when I see your face
'Cause there ain't no one on this earthBaby,
could ever, ever take your place
B.B. King/Linda Ronstadt

Dusk had come and campus lamp posts came on to cast clouded shadows. We stopped under one of the lights and spoke of how we both got here and I learned she, too, was in pain while we were apart. Yet, our hands now in hand stirring our hearts and a relief to know we were well, lifted our spirits as we hugged firmly and kissed softly on the streets of Boston. 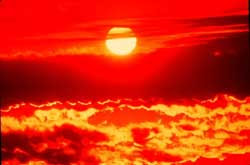 The myriad images, lush with hormonal stylizing, evoke a time that I personally relate to: This is yet another jeweled bead in a necklace of enriching, fulfilling, literature. Regardless of generation, this story can be be enjoyed by everyone because it is told so artfully. This man can WRITE !